A research team from Caltech and the UCLA Samueli School of Engineering has demonstrated a promising way to efficiently convert carbon dioxide into ethylene—an important chemical used to produce plastics, solvents, cosmetics, and other important products globally.

The scientists developed nanoscale copper wires with specially shaped surfaces to catalyze a chemical reaction that reduces greenhouse gas emissions while simultaneously generating ethylene—a valuable chemical. Computational studies of the reaction show the shaped catalyst favors the production of ethylene over hydrogen or methane. A study detailing the advance was published in Nature Catalysis.

"We are at the brink of fossil fuel exhaustion, coupled with global climate change challenges," says Yu Huang, the study's co-corresponding author, and professor of materials science and engineering at UCLA. "Developing materials that can efficiently turn greenhouse gases into value-added fuels and chemical feedstocks is a critical step to mitigate global warming while turning away from extracting increasingly limited fossil fuels. This integrated experiment and theoretical analysis presents a sustainable path towards carbon dioxide upcycling and utilization."

Currently, ethylene has a global annual production of 158 million tons. Much of that is turned into polyethylene, which is used in plastic packaging. Ethylene is processed from hydrocarbons, such as natural gas.

"The idea of using copper to catalyze this reaction has been around for a long time, but the key is to accelerate the rate so it is fast enough for industrial production," says William A. Goddard III, the study's co-corresponding author and Caltech's Charles and Mary Ferkel Professor of Chemistry, Materials Science, and Applied Physics. "This study shows a solid path towards that mark, with the potential to transform ethylene production into a greener industry using CO2 that would otherwise end up in the atmosphere."

Using copper to kick-start the carbon dioxide (CO2) reduction into ethylene reaction (C2H4) has suffered two strikes against it. First, the initial chemical reaction also produced hydrogen and methane—both undesirable in industrial production. Second, previous attempts that resulted in ethylene production did not last long, with conversion efficiency tailing off as the system continued to run.

To overcome these two hurdles, the researchers focused on the design of the copper nanowires with highly active "steps"—similar to a set of stairs arranged at atomic scale. One intriguing finding of this collaborative study is that this step pattern across the nanowires' surfaces remained stable under the reaction conditions, contrary to general belief that these high energy features would smooth out. This is the key to both the system's durability and selectivity in producing ethylene, instead of other end products.

The team demonstrated a carbon dioxide-to-ethylene conversion rate of greater than 70 percent, much more efficient than previous designs with a yield of about 10 percent under the same conditions. The new system ran for 200 hours, with little change in conversion efficiency, a major advance for copper-based catalysts. In addition, the comprehensive understanding of the structure-function relation illustrated a new perspective to designing highly active and durable CO2 reduction catalysts in action.

Huang and Goddard have been frequent collaborators for many years, with Goddard's research group focusing on the theoretical reasons that underpin chemical reactions, while Huang's group has created new materials and conducted experiments. The lead author on the paper is Chungseok Choi, a graduate student in materials science and engineering at UCLA Samueli and a member of Huang's laboratory.

The research was supported by the Office of Naval Research, the U.S. Department of Energy, and the National Science Foundation, with additional support from the National Research Foundation of Korea, the Irvine Materials Research Institute, and ExxonMobil. 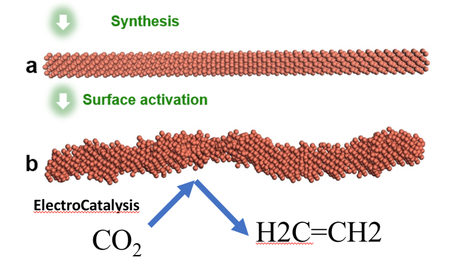 Researchers synthesized the smooth nanowire and then activated it by applying a voltage to get the rough stepped surface that is very selective for CO2 to ethylene. Credit: UCLA/Caltech
Image Lightbox 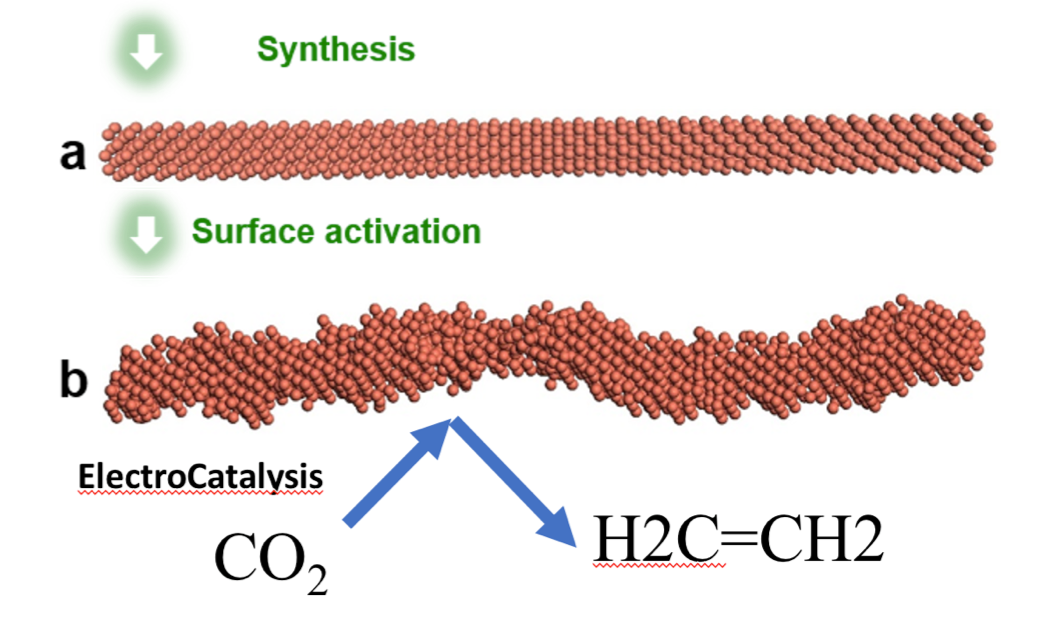 Researchers synthesized the smooth nanowire and then activated it by applying a voltage to get the rough stepped surface that is very selective for CO2 to ethylene.
Credit: UCLA/Caltech
Download Full Image
Subscribe
The Caltech Weekly